UPDATE: Simpler archives that just contain the needed registry files and SmartHeap are now available. Obviously, the different Atlas engine versions can't just be mixed and matched because the games' personality files had to be built for a specific version.

It took some work, but I've released updates for Mega Math Blaster and Reading Blaster 2000, which will allow them to run in Windows 11!

It seems like someone at Davidson accidentally shipped a development file for Mega Math Blaster onto a retail CD!

That's right, my CD of Math Blaster Ages 6-9, a 1998 re-release of Mega Math Blaster that I got as a kid, contains a file called MEGAMB.APP. You can view it here.

I've been trying to reverse-engineer the Blaster series' engine, which is called Atlas Game Engine. I've posted my findings here, but here it is again:

The Atlas Game Engine is a proprietary game engine developed by Davidson & Associates for use in their games in the Blaster Learning System. It was originally developed for the classic Mac OS and Windows.

Much of the game data is stored in three game files that use the game's ID as the name. They contain the extensions DLL, BAP, and RES. The DLL file is referred to as the "personality". It...
Continue…
Discoveries Site News

The decompilations for Maniac Mansion V1 and V2 are complete. All that is needed are comments describing what is going on.

Next up, Zak McKracken and the Alien Mindbenders! 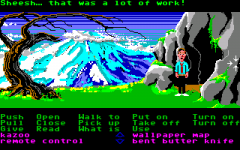 Portal is set up

Now when you go to the root directory, you'll find all the threads in the news forum. Check back every now and then for adventure game-related news!
Continue…
Site News

I'm planning to move the various resources over from SCIProgramming to the new board. I've been taking account of things that I could bring over...

Arcade
Doesn't work at all. Probably don't need it anyway.

Shop
Uses SMFShop. I can replace this with trophies, which are standard in XenForo.